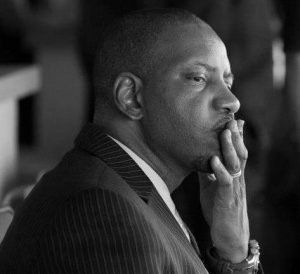 Shawn Etheridge is a visual artist based in Raleigh, NC.

A native of Elizabeth City, North Carolina, Shawn has been creating art since childhood. He began his love of the arts singing, writing poetry, and trying to “out-draw” his nephew when they were children. Starting out using markers and colored pencil, he was introduced to painting with acrylics by his 8th grade art teacher. It was also around this time that he was exposed to graffiti writing by a childhood friend, which had a profound impact on his style by fostering a love of color and the preference of markers over brushes. Attending North Carolina Central University from 1987 to graduation in 1993, he majored in Public Administration while continuing to nurture his craft as a part time art student. Although this was not a major course of study, he found a “second home” in the Fine Arts Department.

His artwork has been displayed in numerous establishments spanning the east coast with his base being in the Raleigh-Durham Area, including the Hayti Heritage Center and Durham Arts Council in Durham, NC, the Garner Performing Arts Center, Garner, NC, The Mint Museum in Charlotte, NC, and the William R. Harvey Art Museum in Talladega, AL. He has works in the permanent collections of Benedict College in Columbia, SC, Saint Augustine’s University and Shaw University in Raleigh, NC. Prominent owners of his work include notable public figures Erykah Badu and Dr. Cornel West. 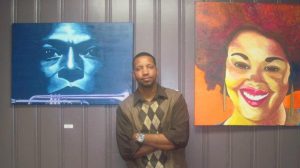 While having worked in various mediums such as pencil, colored pencil, charcoal, oil pastel, clay (hand building and throwing), wood sculpture, plaster sculpture/casting and mixed media, Shawn’s current mediums of choice are oil pastel and opaque paint markers. What Shawn considers his first real collection, named “the Rebirth of Stick”, was a reinvention of the stick figure using fluid forms and broken lines. Aside from personal work and various commissions, his latest endeavor and labor of love has been crafting a series centered around celebrating and shining light on the country’s Historically Black Colleges and Universities.